Back Home > Student Stories > Ian on Settling in and Joining Societies

Ian Lynam is an English and Classics graduate who has worked as a journalist, TEFL teacher, civil servant and now digital marketing officer. He graduated in 2016 and then completed a masters in the University of Edinburgh. He currently works as an intern with the Disability Service. 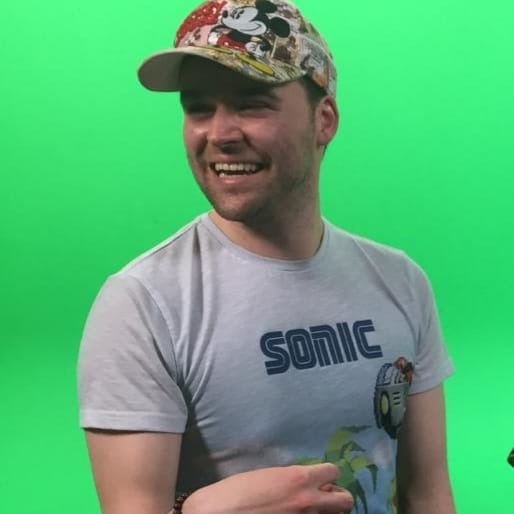 Tell me about your life before Trinity. What was school like?

I went to Oatland’s Primary School until I was 13. I had a resource teacher who was helpful, but it was still a really hard time. I wasn’t good at regulating my emotions, so I was always crying and getting in fights. The worst time was fourth class when I was about eleven. My teacher that year put me at a table separate to the rest of the class. After a while he didn’t even bother testing me. At parent-teacher night he told my mother that I’d be lucky to stack shelves as an adult. Secondary school was hard and in many ways the bullying was worse there, but I finally had friends which made a big difference.

What do you mean by bullying?

In primary it was mostly being wound up until I had a meltdown so they could have a good point and laugh; Secondary was much more complex. Weirdly I’m convinced the guy who bullied me was autistic himself. The kinds of observations and insults he launched at me were so specific they could have only come from close observation. He was very effective at gaslighting; he’d frequently stare at me in class until I got agitated and would claim he was doing nothing. Whenever I was called on to answer a question in class he would sigh loudly. I was quite a chatty, attention-seeking child but in my teens I started getting quiet and withdrawn. In a weird way part of the reason I don’t stim very much anymore is I had to suppress it for so long in school because I felt like I was always being watched and judged by this guy.

Did you always want to study English?

I went through lots of dream careers as a kid. For I wanted to be a video game designer. I then became interested in microbiology because I used to be obsessed with rare diseases: I had to be reassured by a teacher at the age of eleven that the spots on my hands weren’t a symptom of bubonic plague. Later as a teenager I wanted to study medicine because I was obsessed with House MD. He’s hinted to be on the spectrum in the show and I loved the idea of being this expert that people had to listen to even if I had social difficulties. Unfortunately, I wasn’t great at science so I had to reconsider after the Junior Cert. I was always reading so English eventually made sense. I was nervous about not being able to turn it into a career but at the open days I attended they really stressed how many transferable skills you gain from studying literature. I was also fascinated by Greek mythology and the Roman empire, so Classics was an easy choice for me.

Did you have any expectations going into Trinity?

As I said I read a lot when I was younger. I wanted to write fantasy novels and dreamed of becoming a writer. Also, due to struggling in social situations I always envied witty literary types like Oscar Wilde, George Bernard Shaw and Charles Dickens. I thought studying English would turn me into this genius Terry Prachett type with a quip for every occasion. Aside from the fact that people rarely like a smart-aleck, this is a very small aspect of studying literature. I imagined every lecture would be the professor reading a poem and going ‘this is genius and here’s why.’ In a sense they teach us how to read all over again. I used to speed read through books to get to the end of the story. Now I read slowly, considering each paragraph and how it relates to a bunch of other historical, social and thematic contexts. I ended up really excelling in reading texts alongside historical documents and went on to do a masters in Literature and Society.

Did you join any societies?

During Fresher’s Week there was and still is a massive amount of societies looking for members. I’d say I joined fifteen separate societies but went to the events of maybe three. The Hist and the Phil are a good idea if you’re interested in speaking and debating: personally, I just wanted to see the special guests! I joined the Science Fiction society, the Comedy society and DU Players within the first few weeks. Players was fun and the have nice Fresher’s week events. I even starred in a show based on Edgar Allan Poe’s stories. Sci-Fi was great; they always had a film or television show playing in the room. When I first started they had an amazing room in House 6, just next to Front Square. It was an excellent place to hang out in between lectures and even a little bit after classes ended. A lot of good friendships were made with other people on the spectrum in that room. There were a few people who even started skipping classes and staying there constantly. They moved to Goldsmith later and I gradually stopped going after that. In hindsight that was probably a good thing. A lot of the people who skipped classes ended up failing the year. There’s such a thing as getting too comfortable!

Did you start doing comedy in Trinity?

Yes, I joined the Trinity Comedy Society in 2012 and started doing stand up in the January of 2013. The Comedy Society is an excellent way to see good Irish comedy at an affordable price, but they also run a comedy class. The class lasts for six weeks, culminating with a graduation performance. It’s great for a laugh and even if you don’t see a future in the class it’s handy for building up confidence with public speaking. I ended up joining the society committee and serving as secretary and entertainment officer respectively. I made friends working in the society that I work with to this day. It also gave me great experience in working as part of a team. Comedy was more of a hobby while I was in Trinity. When I went to Edinburgh to do my masters I joined the Edinburgh Revue (their equivalent of the comedy society). It started as more of an experiment to see if I could make friends and be funny to people in a different country.

Is that when you started writing a show about autism?

That mostly happened when I came back home in 2017. I came up with the title ‘Portrait of the Autist as a Young Man’ in Edinburgh, but I didn’t have much of an idea about the content until later. I was worried that I wouldn’t be able to write jokes about autism without being exploitative or just repeating the negative stereotypes you see online. There’s a lot of unkind memes about ‘autistic screeching’ to imply we’re hysterical but most of my comedy approaches the idea that neurotypicals can be far more insensitive. My show became a way of reclaiming painful experiences and turning them into a source of strength. Also I’ve noticed that certain performers on the spectrum have strong feelings about being seen as an autistic performer and wishing to be seen as a performer first. I respect this choice and groups like Asperger’s Are Us manage that separation really well. Personally, I tried the same approach but found I was getting profiled as special needs without ever disclosing it to people. Comedy allowed me to ‘come out’ on my own terms.

Do you have any words of advice for first years?

Be yourself, not the version of yourself you think will fit in. Be respectful; you’ll likely meet people from unfamiliar backgrounds but look on it as an experience to learn. Essays can be scary but Student Learning Development is there for a reason. Move at your own pace and try to avoid comparing yourself too much; you can’t be the big fish in the small pond forever. Finally, try to eat a vegetable now and then: I recommend Govinda’s on Aungier Street!

Ian debuted Portrait of the Autist as a Young Man in Smock Alley with the Scene and Heard Festival in February 2019. He will be performing in Knockanstockan and Vodafone this July and is interested in working more in the field of disability.